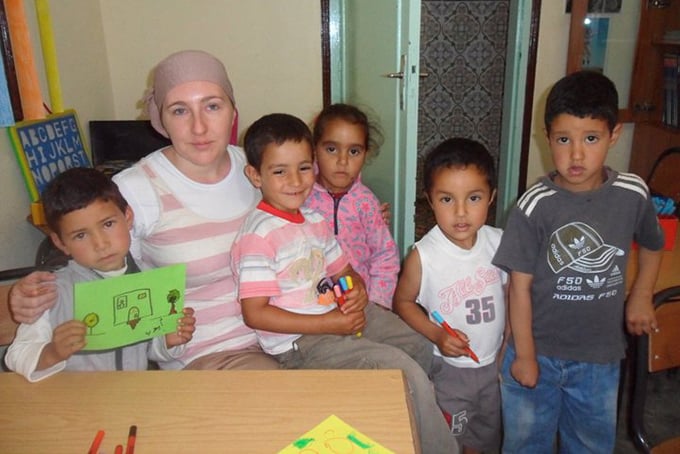 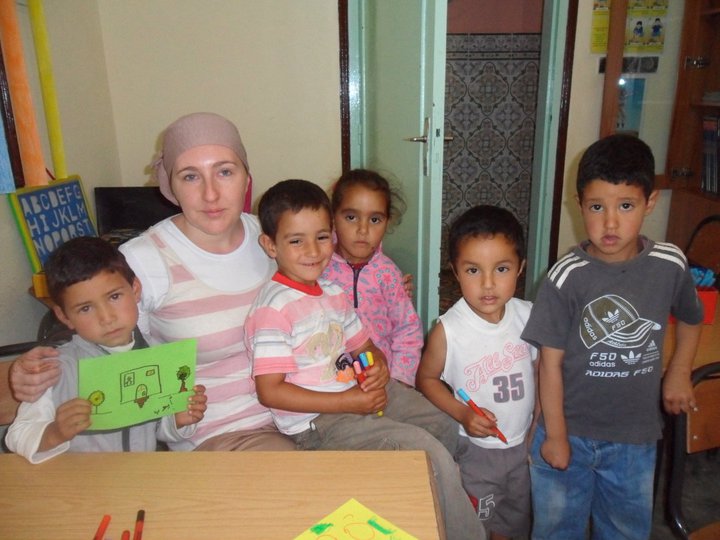 On the way to the airport a friend gave my sister advice ‘do not be surprised, expect the unexpected, anything goes in Morocco.’ We laughed.

Moroccan hospitality never ceases to amaze me. After having set off from home at 11 a.m., got stuck in London traffic, unpacked and re-packed suitcases at the airport due to their crazy baggage allowances, flown to Morocco, piled donkeys with hundreds of kilos of baggage to transport up a bumpy (to say the least) ‘road’, we arrived at the house we were to stay at for the week. Samira and her family were extremely welcoming and helped us into the house. They were kind from the start and I (as I’m sure the others did) felt totally at home. Within less than an hour food was served and it was delicious. Every dish we ate with Samira was lovely.

On the first day we woke up, had breakfast and soon realised that moving a big group around would take time. It took us about 2 hours to leave the house! We walked down to the schools and the village to have a look around and see where we would be for the week. The government school allowed us in and let us speak to the children; however I am not sure how happy they were that we were there. Then we went to Hannan’s preschool, which was totally different.

As soon as we walked in we were greeted by Saida. She was smiling, as she always seems to be, and asked us in. The children were in the middle of lessons but stopped and stood for us to disturb them, this was a little uncomfortable whilst also very sweet. We, all 9 of us, walked around the Pre-school and tried to talk and communicate with the children as best we could. I think from this first meeting all of us fell in love with the children and started to plan who could fit which child into their suitcase.

The next day we went down to the Pre-school in a smaller group and observed the teachers. They had great enthusiasm and this was evident in their manor with the children. They were gentle and calm with them and seemed to be working to do their best for these children, who they could themselves probably relate to. Saida told me several stories about children who travelled hours either by foot or donkey to get to and from the Pre-school. This made me appreciate the luxuries I have in my own life and also realise the deep impact of education on these young children.

We observed the teachers for the first session and helped where we could, although my knowledge of the Arabic alphabet is almost zero I was still able to encourage the children and Karim was extremely good at translating the explanations been given by Saida to the children (and to me).

Once the children had a short break, some had a snack with them, they went back for their second session of the day. This time it was my turn to be observed and I was hoping Saida would endorse what I was doing, especially as I asked to rearrange the classroom furniture! We played some simple maths games that got the children moving around and excited. Not all of the children understood the games straight away as they were so different to their normal learning habits; however with encouragement form Saida and Karim, who was translating the rules and questions, they all had some part. I think demonstrating these games would not have been as effective if Saida had not taken part. With her comfort and role the children were more confident to ‘have a go’. It is obvious they all look to her for support and consistency in their lives and she does this naturally and effortlessly.

After the children had left Amy and I had time to speak with both Saida and Fatima. But before we could start we had of course to eat! We enjoyed sitting and eating raief and drinking mint tea, sharing our stories of our own education and what we had all done in our careers. This was a great chance to get to know both Saida and Fatima.

We sat down to discuss the activities and resources for Maths which we had made back home and we were encouraged by the eagerness of both of them to listen and discuss with us their teaching methods in contrast our teaching methods. Karim translated for us and was invaluable for this meeting. They seemed to like our ideas, although simple, as they could implement them easily and thought the children would benefit. Both teachers wrote down the suggestions for activities and for using resources effectively.

Tuesday night we were all about ready for bed when Samira told Somaya to stop using the hair dryer because the lights were flickering and there wouldn’t be enough electricity for the band. Band? ‘Do not be surprised, expect the unexpected, anything goes in Morocco.’ We were having a party to help celebrate the immanent birth of Samira’s baby. We were quickly changed into Moroccan Libsa and we slapped on some make up. We dance and we even treated to beat boxing Moroccan style. The party was great fun and we all enjoyed it, however the thought of the walking we would be doing in less than five hours started to loom over us and was in the back of our minds.

After about three to four hours sleep, we were up and preparing for our hike.

Wednesday was the hike which a few were expecting to be hard and others said it would be done in two hours! How wrong they were. Eight and a half hours after leaving and walking through the amazing scenery, which was so desolate, echoes of our voices (and bad singing) could be heard for what seemed like miles around, we reached the source. It was a great feeling of relief and tiredness mixed with ‘I CAN’T BELIEVE WE HAVE DONE IT’, as for the last 15k I felt like if I stopped I would cry and not move even another cm.

Reaching home on Wednesday night all everyone wanted to do was have a hot shower and sleep. Smaine however had other plans. He decided we would make the puppets for the puppet show the following day (at 2am). Begrudgingly some of the more easily persuaded of us sat down and did as we were told! It was worth it though as they were brilliant. However, I still need consoling when I think about how the lovely basket I made for Red Riding Hood was cast away – obviously not up to the standards expected!

On Thursday we repeated the process with the teachers for English/Literacy resources and ideas. This was a little more difficult with the difference in alphabet, yet we stressed that activities and games could be developed and adapted to suit. Again the discussion here was invaluable and I think we were all excited about teaching and were reminded of the reasons we all became teachers in the first place. This is the part I love, the teaching and it can be easily lost at home due to all of the bureaucracy and paperwork!

It was great to go in on Thursday and see some of the ideas we discussed already being used; for example using the clock to introduce the children to the concept of time.

The puppet show on Thursday was amazing. In the morning the children had chance to help create parts of the scenery and then Smaine lovingly put it together with help from Nicloa, Bronwen and Farah.  It was so effective and the simple resources he had collected over only a few days were all used to create the final backdrops. The children were encouraged to come back in the afternoon when their mothers came to the women’s workshop that afternoon.

The classroom was filled with slightly anxious children (I’m sure they had no idea what to expect). Smaine spoke in French whilst Karim and Mina operated the puppets and were amazing with creating the voices of the different characters. The children loved their party bags with sweets, given to them at the end of the show.

It was a sad moment saying bye to Saida and Fatima however it somehow felt like it was not the end. Perhaps as the week had been so short and flown by so quickly or perhaps because I feel I will go back some day. Either way I know all of us enjoyed each others company and have learnt new things about ourselves and about our teaching.