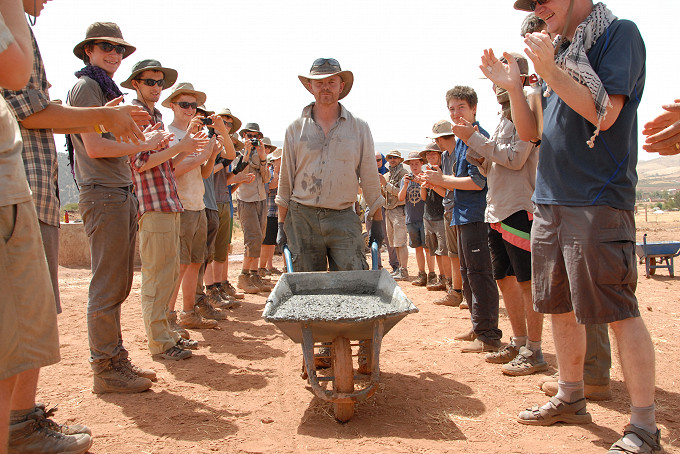 What an amazing time when the Central Yorkshire Scouts visited El Borj in August.

They were only in El Borj for three days but what they achieved was truly miraculous considering the obstacles we encountered.

Hmad and I arrived 5 days before the Scouts to help prepare by making sure the 1,000 m2 of our land had been prepared. A digger had already been hired and the boundary dug however when the Scouts arrived and Alan the builder inspected he discovered that they had dug too wide and too deep (measurements are a bit hit and miss in Morocco sometimes??) Alan took charge of the digger and did an amazing job despite it not having working breaks. He sorted the boundary and cleared the whole site ready for building. We struggled to find and hire a cement mixer eventually finding one on the second morning after the Scouts arrived. Previously the cement had to be mixed by hand and we managed to get some young strong men from the village to help. During this time using the soil excavated from the land they managed to smooth out the dirt track that leads to our land which meant the cars are able to have a slightly smoother ride!!

We had hired people who own the big old Bedford trucks to go further up the mountain to bring down truck loads of stones to fill in the foundations before filling with the cement (Moroccan style) however everyone we hired would come to us after 1 trip and say they would not go back it was too precarious. One truck actually became well and truly stuck and was almost totally on its side and the digger plus about 5 men including Hmad went to try and rescue eventually managing to free the truck after about 4 hours.

When the Scouts arrived at dusk they soon set to work setting up their camp. In the midst of their convoy we found a car with Gendarme who asked many questions of who they were and why they were here. They went away with details of each person and even asked if they could come back and join the last evening celebration which of course we said yes.

Each morning the scouts would start work as early as 6:30am and begin to fill the boundary with the stones and infill with the prepared cement. Hmad and I would collect 60 or 70 loaves of bread from a baker each morning at 7:00am and take to the village for the scouts breakfast. The scouts worked in groups and some would be working while others having a rest in the shade. Bearing in mind the average temperature was 39C these guys were working extremely hard in this heat. On the afternoon of their final day they poured the final barrowful of cement. They signed it off and everyone clapped and cheered. Hmad and I arrived with perfect timing to see this amazing achievement completed. Now the cement and equipment which was left is being used by a local builder and local volunteers to start building the actual perimeter wall bit by bit and who knows next year the scouts may be helping to build the first classroom!!!

Not only did they complete this part on our land they also did some amazing work in our pre-school. Another Alan made a frame which can be put over the square open area in the flat roof. (This open area with metal grid is built in to Moroccan homes to allow light and air in the hot summer weather. However during winter when it rains it of course lets in the cold and the rain and most just put some plastic sheeting over for protection. This frame is sloped and has plastic corrugated sheet to let rain flow off and can be used for protection in winter and for safety when the children are playing in the roof play area. They also painted the stairwells and a team painted murals on the walls upstairs on the roof play area which before was just bare brick. Now it is full of colour. I wish I could be there to see the children’s faces when they start school on 10/09/14

On the final evening the village wanted to prepare a celebration so a huge Berber tent was provided and a lavish meal prepared by the women in the village. The Bedford truck brought carpets, tables and chairs and a traditional Berber folklore group was hired to provide the music. Music was also provided by CD when the group were eating and the local children and the scouts were dancing together and having a marvellous time. Before the celebration started the Scouts raised their flag speeches were made and Hmad and I were presented with Scout expedition polo shirts and “neckers” and made members of the Central Yorkshire Scouts. We had also presented each Scout a traditional Berber handmade cushion cover as a thank you and memento of their visit.

It was planned they should have an early night as they were tired and had an early start in the morning however in true Berber style things kept going well into the early hours.

Next Morning Hmad and I were there with their bread again for Breakfast and to make sandwiches for their long journey to Merzouga where they were camel trekking in the dessert. One girl was stung by a scorpion on that last morning but apart from some pain and swelling she was OK

It was so sad to see the convoy disappear into the distance and leave the village. The village will never forget the visit by Central Yorkshire Scouts.

We gratefully acknowledge the support of Children of the Sahara Foundation for making this project a reality. 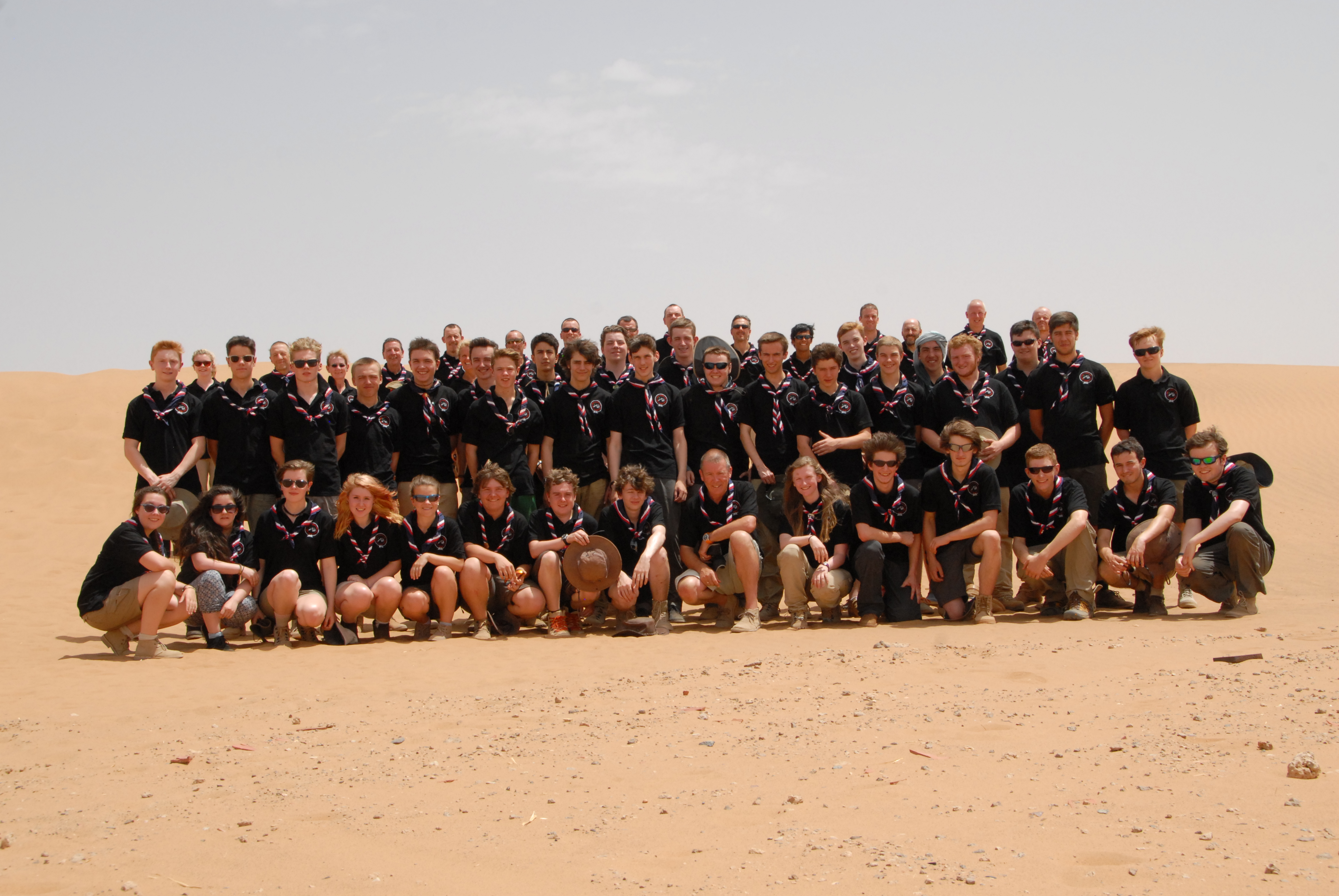