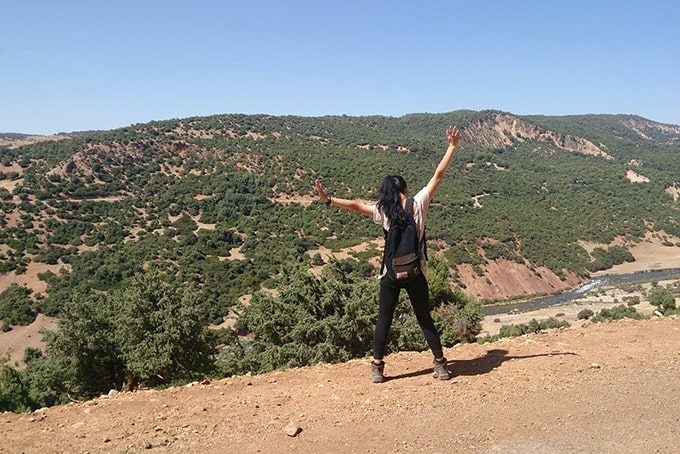 I saw my dream unfold before my eyes this year in our Pre-school in El Borj Morocco.

Of course it was born in prayer and hard work many years ago, with an awful lot of help from others. People who have prayed and given financially and people who have raised money from running marathons and the groups of young people who have physically gone to El Borj to work in the pre-school and raise funds by trekking in the middle atlas mountains. Many have been involved in making a difference these last few years in the village that Hmad still calls home.

When we were asked a few years ago by one of the teachers in the government school if we could start a pre-school I began to visualise what it would be like. Brightly painted walls, sand and water play, lots of interesting things to play with but learning through play with independence and confidence changing the children’s lives. When we first bought the house which is the pre-school and interviewed teachers the challenge was to create a place that would reflect all I dreamed about and be able to impart this to the locals but I had difficulties in conveying this even to Hmad as he had never experienced anything other than rote learning. Sitting still in rows repeating what the teacher said is normal in Morocco even for 3 year olds.

Last year an amazing group of 9 went out and worked with the teachers and children bringing resources and their own expertise. Space was limited but some progress was made. The group went on a 30K trek in the Atlas Mountains and raised over £6,000 which went towards building a second story on to the pre-school. This year the team of 8 have just returned where they found the second story newly built and waiting for them. They brought with them loads of resources and during the week worked tirelessly painting the walls with colourful frescos and setting up the rooms upstairs with resources and amazing ideas for working with the children. They created a creative room for crafts and showed the teachers how to make play dough and how to allow the children to paint and have free expression using what they brought. Another room was created for other types of play from puppets and musical instruments to puzzles and building bricks. (A Berber rug was bought for the children to sit on and play) A reading corner was created and we bought Berber cushions to surround this with mats on the floor and a beautiful canopy and we even found story books of Cinderella and Puss in boots in Arabic so the children could sit and hear the stories. Upstairs in the roof area where the floor had been beautifully tiled and the walls were high we decided to use as a play area. Footballs, skipping ropes, bats and balls, Water and Sand play were all set up. Hopscotch beds were painted and we had to show the children how to play with some of these things as they had never seen these before. Most of what we take for granted here in the UK the children had no concept of before that week. By the end of the week the teachers were embracing what they had been shown saying they did not understand the concept of learning through play until that week and how the children had not been bored and the time had flown. The children don’t want to go up to the government school when they reach 7 they want to stay in our school.

As well as everything done for the children we also conducted women’s workshops  and have managed to get the women to meet regularly to support one another and maybe start a co-operative to help each other. Also basic adult education, reading, writing and arithmetic are being set up.

The group plus Hmad and I went on the Trek again this year and had a wonderful though exhausting day trekking through the mountains to the Source of the River which runs through El Borj. We saw lots of Monkeys this year and ate breakfast in a Berber tent. Money is being raised again and some of the group are already talking of returning next year.

When I saw the children enjoying all the toys, puzzles, puppets and other resources and the space they now have my eyes filled with tears as I saw my dream come true before me.

We have done this now in the pre-school, we want to replicate this and adapt to a school for 7 to 16 year olds in the village. This will take more time, prayer, finances, and practical help, but we CAN do it together.

Thank you to everyone who has played even the smallest part in helping fulfil not only my dream but giving the children in El Borj a dream of a better future.